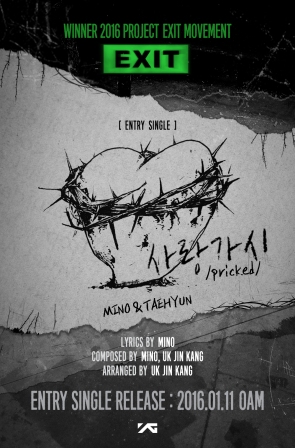 [OSEN=이소담 기자] WINNER’s entry single, which is scheduled to be released on January 11, is a duet song by SONG MINHO and NAM TAEHYUN titled “PRICKED”.

At 3 PM on January 3, YG Entertainment uploaded a poster on its official blog announcing the title of WINNER’s entry single.

The poster features a graphic image along with the title of WINNER’s entry single. The image is designed by SONG MINHO, who is known to love drawing.

The poster also features the phrase “MINO&TAEHYUN” to show that the song will be sung by SONG MINHO and NAM TAEHYUN. Since they have very distinctive voices and contrasting tones, expectations are running high for the synergy effect they will create.

On January 5, WINNER released a movie-like teaser video. They released a poster for their comeback project for the year on January 7. According to the poster, WINNER will release an entry single on January 11 and a mini-album on February 1. It also featured the phrase “2016.xx.xx” implying that WINNER has something planned for the near future.

Meanwhile, when WINNER released their first album “2014 S/S”, the title track “EMPTY” swept the online charts. Not only did they have all the tracks of their album ranking high on the charts but they also dominated daily, weekly, and the Gaon charts. They were indeed the hottest rookie of the year. Moreover, WINNER has won the No.1 trophy in the shortest period ever on the charts of all the three major broadcasting companies. They have gained unprecedented popularity as a rookie and swept all the rookie of the year awards at the end of the year.

17 months have passed since the release of their debut album “2014 S/S”, but we shall soon see what WINNER has in store for us.